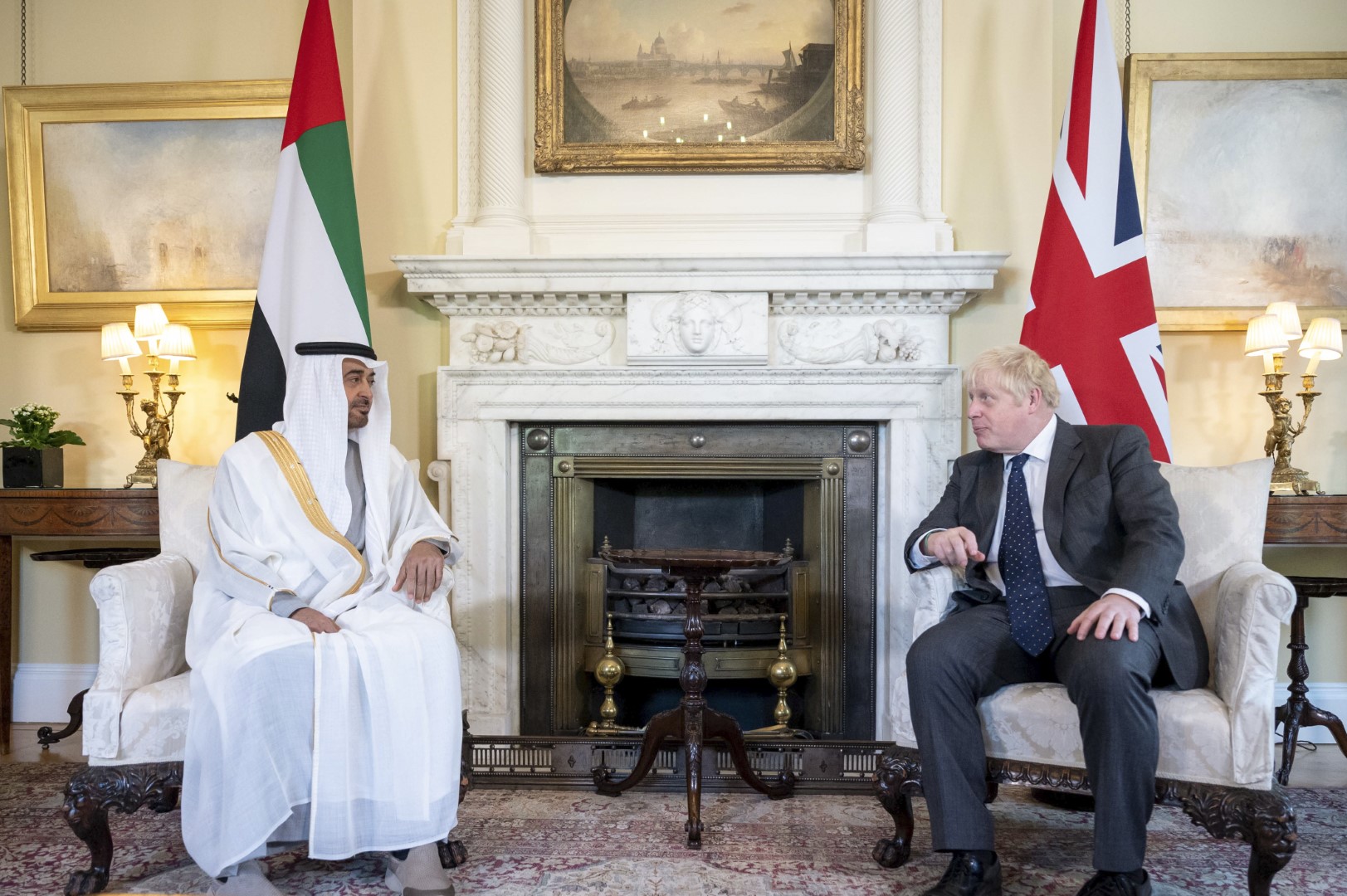 His Highness Sheikh Mohamed bin Zayed Al Nahyan, Crown Prince of Abu Dhabi and Deputy Supreme Commander of the UAE Armed Forces, and Boris Johnson, Prime Minister of the United Kingdom (UK), have discussed the historic friendship ties and joint strategic cooperation between the UAE and the UK and ways to enhance relations in the best interest of the two sides. His Highness Sheikh Mohamed bin Zayed and Johnson also tackled several regional and international issues of mutual interest. This came during the UK Prime Minister's meeting with His Highness Sheikh Mohamed and his accompanying delegation in London. The UK Prime Minister welcomed the visit of His Highness Sheikh Mohamed to Britain and emphasised that "it represents strong support for the development of relations between the two countries". As the meeting commenced, His Highness Sheikh Mohamed extended his heartfelt condolences for Johnson and his family on the death of his mother. Johnson extended thanks and appreciation for His Highness Sheikh Mohamed's warm feelings. His Highness Sheikh Mohamed and the UK Prime Minister reviewed cooperation and the promising opportunities to enhance it in the investment, economic and trade fields and other vital sectors as part of the ambitious economic, trade and investment programme that the two countries agreed upon last year. The meeting touched on the latest COVID-19 pandemic developments, and the efforts to contain its humanitarian and economic repercussions and the importance of strengthening international solidarity during these circumstances to overcome this common global challenge. It also highlighted the 2021 UN Climate Change Conference (COP26), which will be hosted by the UK next November as well as its importance in advancing global efforts to address the climate change challenge. Moreover, the two sides exchanged views on regional and global issues of mutual interest and the current developments in the Middle East region and the Mediterranean and the efforts to find a peaceful solution to the ongoing conflicts. His Highness Sheikh Mohamed emphasised that the UAE attaches special importance to its relations with the UK, is keen on developing them, especially in the economic, trade, technological domains and others, as part of implementing the "economic, trade and investment cooperation programme" that the two countries agreed upon in December 2020. His Highness Sheikh Mohamed said, "One of the most important aspects of our developmental projects for the next 50 years is promoting developmental partnerships with various countries of the world, especially with the UK." He also stressed that Britain shares historic ties and strategic interests with the Arab Gulf region and the Middle East and has a significant role in ensuring their security and stability and dealing with their issues. His Highness Sheikh Mohamed said that the UAE is on the cusp of hosting a major global event, i.e. Expo 2020 Dubai. "We are confident that Britain's participation will pave the way for more opportunities for economic and development partnership between our two countries. In the UAE, we seek to make this event a turning point on the road to promoting global economic recovery, establishing global partnerships, and finding common ground to confront global challenges." The UK Prime Minister emphasised that his country attaches special importance to enhancing its ties with the UAE. He also extended thanks and appreciation for the UAE's support in evacuating UK citizens, and citizens of many other countries, from Afghanistan. His Highness Sheikh Mohamed and Johnson drew attention to the importance of the "Partnership for the Future", which the two sides agreed to establish, and which is based on two main pillars: driving sustainable prosperity and addressing global issues, in addition to using this partnership as a launch pad to develop new mechanisms that enhance trade, investment, innovation and enhance cooperation in areas, including life sciences, innovation, energy, regional issues, countering illicit financial flows, education, security, development, culture, climate, health and food security. His Highness Sheikh Mohamed and the British Prime Minister welcomed the signing of a partnership agreement between Mubadala Investment Company and the UK Office for Investment (OfI), worth ₤10 billion, which aims to expand the scope of the sovereign investment partnership between the two countries. Among those who attended the meeting in the delegation of His Highness Sheikh Mohamed included H.H. Sheikh Hazza bin Zayed Al Nahyan, Deputy Chairman of Abu Dhabi Executive Council; Reem bint Ibrahim Al Hashemy, Minister of State for International Cooperation; Dr. Sultan bin Ahmed Al Jaber, Minister of Industry and Advanced Technology and Managing Director and Group CEO of the Abu Dhabi National Oil Company (ADNOC); Ahmed Ali Al Sayegh, Minister of State; Dr. Anwar bin Mohammed Gargash, Diplomatic Advisor to the President His Highness Sheikh Khalifa bin Zayed Al Nahyan; Ali bin Hammad Al Shamsi, Deputy Secretary-General of the Supreme National Security Council; Khaldoon Khalifa Al Mubarak, Chairman of the Executive Affairs Authority of Abu Dhabi and Member of the Abu Dhabi Executive Council; and Mansour Abdullah Khalfan Belhoul, the UAE Ambassador to the UK.